The Middle Ages correspond to a period of about a thousand years. It begins in the middle of the 5th century (end of antiquity) and ends with the renaissance at the end of the 15th century

The Middle Ages is a period of humanity during which the various religions spread over the world.

Three styles in particular stand out: Byzantine, Romanesque and Gothic.

The style is largely inspired by Roman art and Christianity and is also influenced by its Eastern origins. 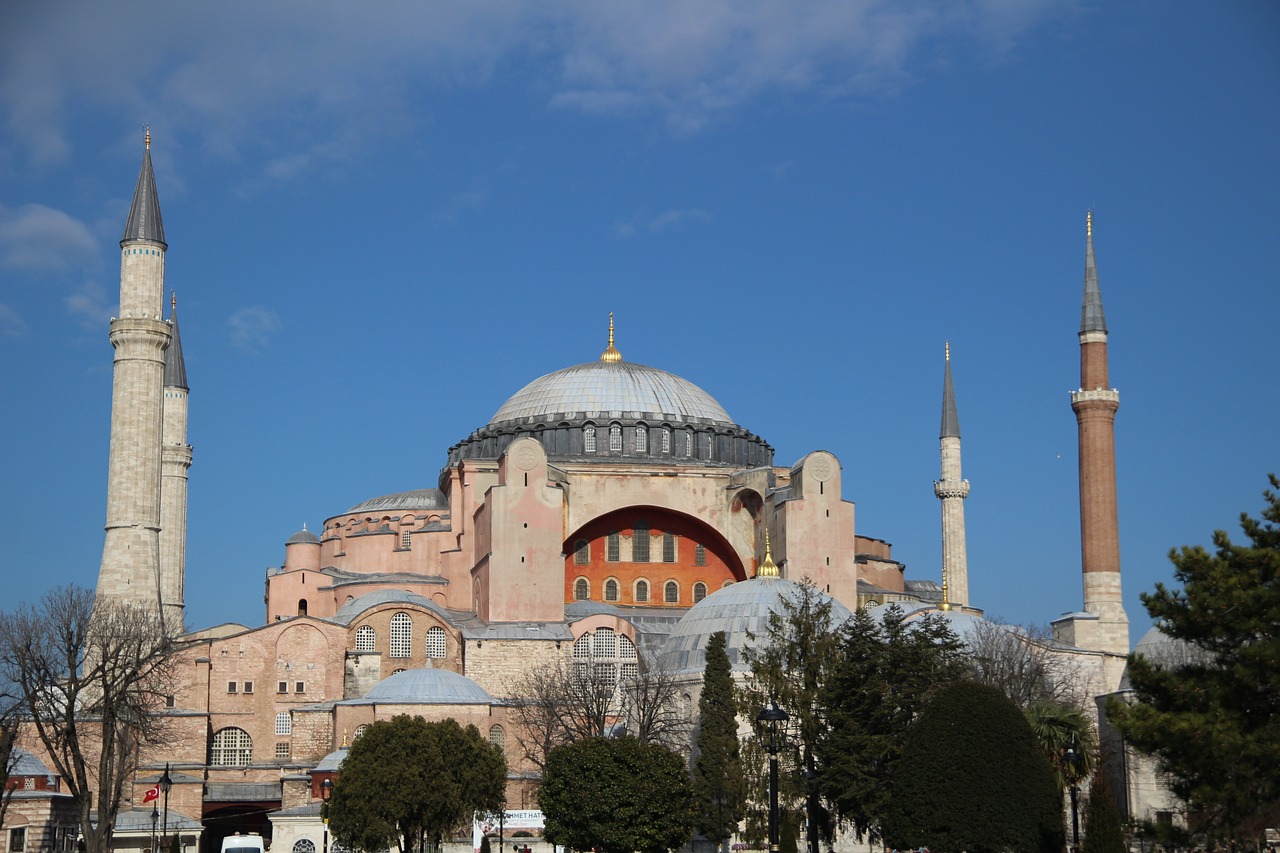 The architecture is characterised by the construction of monumental domed churches such as the Hagia Sophia in Istanbul (formerly Constantinople). Large, colourful murals, mosaics and paintings on wooden panels decorate these churches.

The representations are usually of holy figures (icons) often accompanied by portraits of emperors (representing God on earth). The artists made extensive use of rich materials, enamel paste, mother-of-pearl and ivory inlay. Finally, they were particularly fond of gilding with fine gold.

In the 8th century, the iconoclastic movement led to a massive destruction of this artistic heritage.

Byzantine Christian art was reborn in the middle of the 9th century. It spread to Europe at the time of the Arab conquests. Cultural exchanges intensified during the crusades in the 12th and 13th centuries.

Christianity and the construction of buildings linked to this religion have left their mark on European architecture.

The Romanesque style borrows mainly from Greek, Roman and Byzantine cultures. It is distinguished by the use of stone instead of wood for the ceilings. These take the form of barrel vaults. 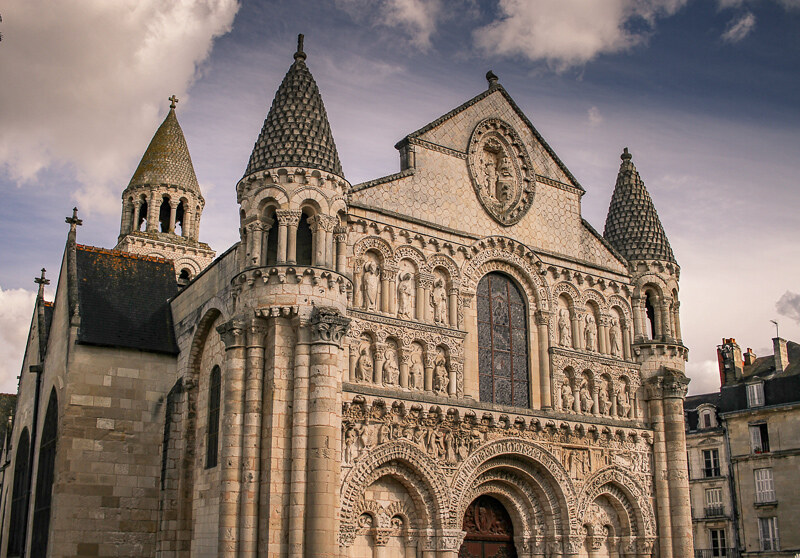 This particularity leads to new technical constraints. These are reflected in the massive appearance of the buildings and the thick walls often reinforced by external buttresses. The semi-circular arch generally characterises the shape of the openings. Rather narrow and few in number, richly adorned with magnificent stained glass windows, they lead to a dimly lit interior. However, the colour palette of the master glassmaker was essentially limited to blue and red at that time.

The statuary and the very important decoration of the capitals represent the essence of sculptural art at this time.

Inside, large frescoes adorn the walls and ceilings (St Savin Abbey). Painted in bright colours, they generally represent biblical characters and episodes. Unfortunately, many of them have been covered or destroyed over time.

In addition to frescoes in churches, illuminated (hand-decorated) manuscripts represent pictorial art. These are usually bibles (Winchester Cathedral Bible), gospels, and psalters (collection of psalms). In Europe, the printing press was not invented until 1450 by Gutenberg.

The beginning of urbanisation saw the construction of the great Gothic cathedrals (Notre-Dame de Paris). This style succeeded the Romanesque and originated in the Ile de France. It then developed throughout Europe and lasted until the end of the Middle Ages. 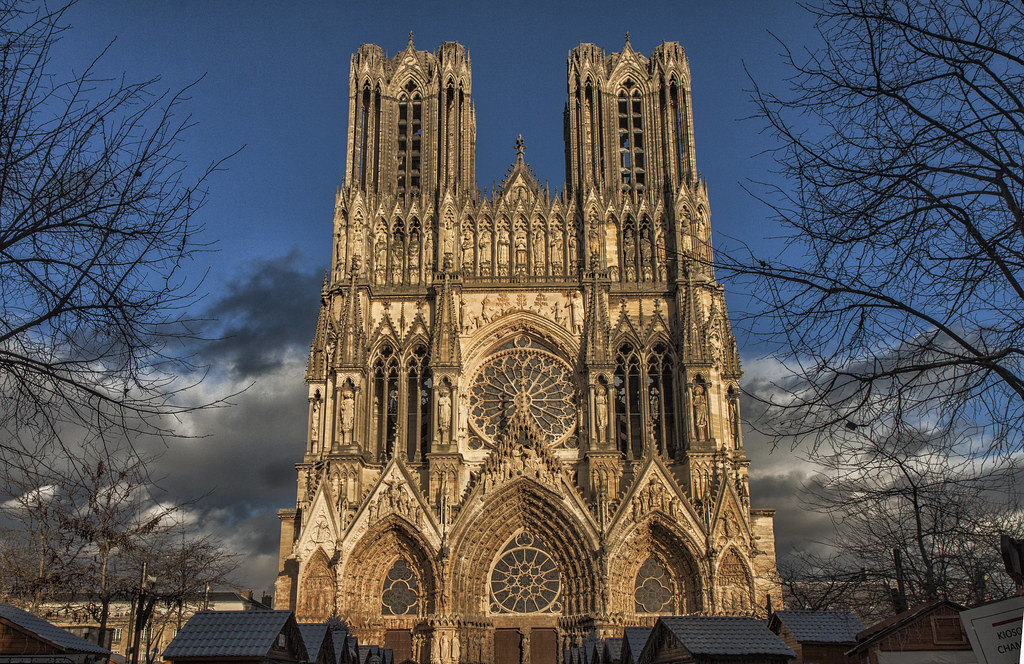 The art of stained glass reached its peak with the creation of sumptuous rose windows (Notre-Dame de Reims cathedral).

Gothic painting differs from that of previous periods in its depiction of non-religious subjects. However, the depictions of holy figures remain the most important. Their size is greater than that of other subjects. The colours are vivid.

Large frescoes adorn the walls of religious buildings and especially their huge vaults.

Altarpieces, carved panels in various materials (wood, stone, ivory, etc.), are used to decorate the back of altars. Generally painted in bright colours, often with a golden tint, they can be fixed or movable, simple or with several panels (diptychs, triptychs and polyptychs). Often, some of these panels are simply paintings and not carved.

The sculpture still recalls the classicism of Greek and Roman art. However, a more naturalistic style is emerging.

In the Middle Ages, art was totally influenced by religions. It is marked by the preponderance of architecture. The ornamentation of religious buildings (churches, cathedrals, abbeys, etc.) also required the intervention of artists such as painters and sculptors. The master glassmakers who created the stained glass windows were on the borderline between art and craft. Mosaics and tapestries can also be admired from this period. Finally, the art of calligraphy and illumination has left us with precious evidence. The Middle Ages came to an end with the Renaissance at the beginning of the 16th century.