Before becoming the artist he is today, Gauguin began his career as a painter with the Impressionists. He soon tired of this movement, which he considered too superficial and purely realistic. He wanted to replace this art with a more intellectual movement dominated by thought. The artist then focused on two-dimensional painting: extremely simplified motifs and a reduced palette of colours. The painter had a profound influence on the Nabis (a group of young artists who gathered around his ideas).

An atypical background, to say the least

Born in Paris in 1848, Paul Gauguin came from a middle-class family. He also had Spanish-Peruvian ancestry on his mother’s side.

At the age of 17, the painter joined the merchant navy. He embarked as a sailor on the quayside of Le Havre to reach Rio de Janeiro, like Edouard Manet in 1848. 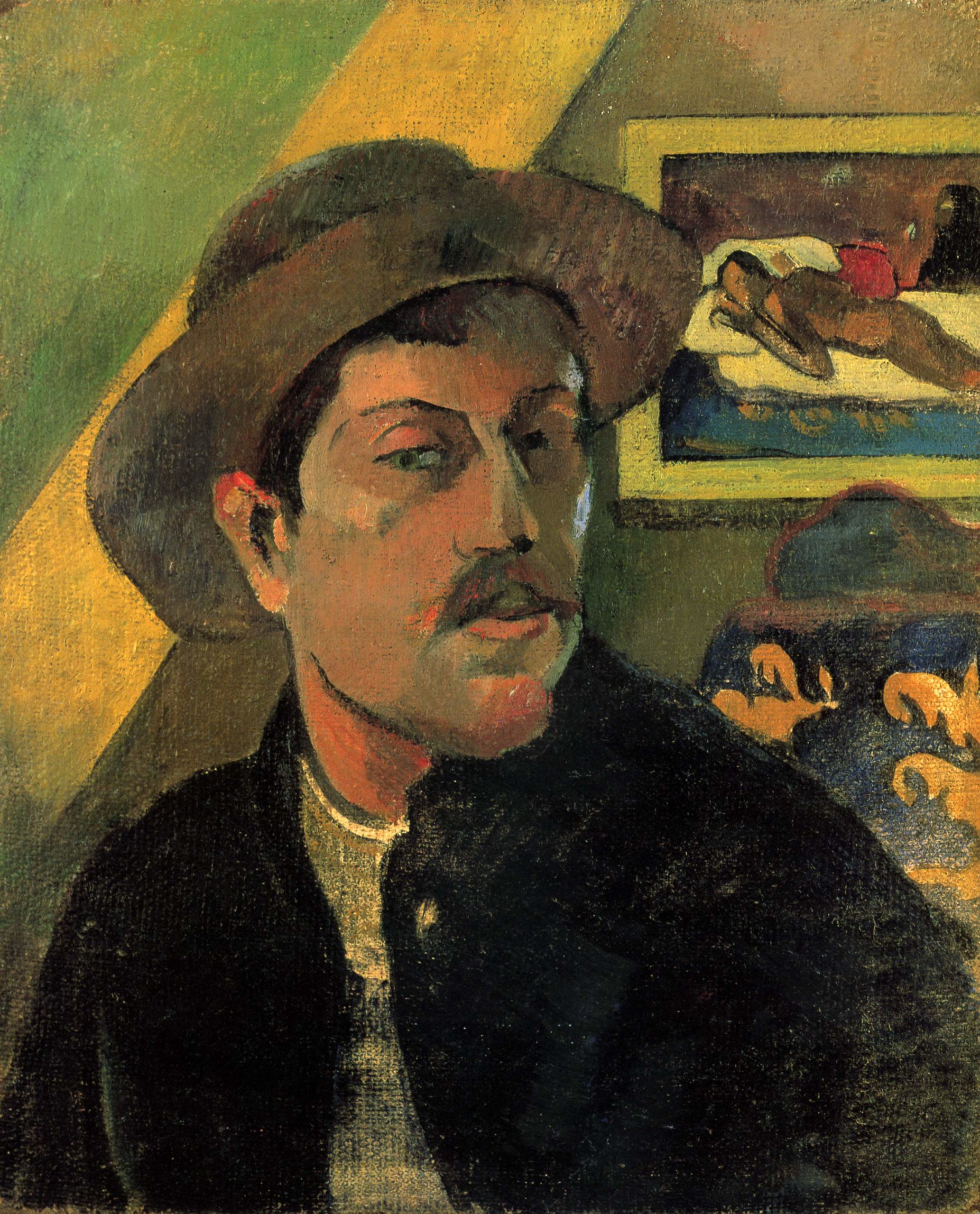 His father was orphaned at the age of one and he also lost his mother in 1867. The photographer, financier and collector Gustave Arosa became the painter’s guardian. He took him to work for a stockbroker. Gauguin led a bourgeois life and started to collect impressionist works and started to paint in 1870. His first painting was done in 1873, the year he married the Danish Mette-Sophie Gad, with whom he had five children. In 1876 one of his landscapes was accepted at the official Salon.

Gauguin’s beginnings as an impressionist

From 1874 to 1886, the painter Paul Gauguin joined the Impressionist movement. At the Arosa family home, he met Camille Pissarro, who introduced him to Impressionist landscapes and taught him the meaning of pictorial composition. In addition, as a collector, he successively bought works by Manet, Renoir, Monet, Sisley, Guillaumin, Cézanne, Cassatt and Degas.

The painter’s technique remained close to that of his mentor Pissarro until 1883. In addition, he owes the Impressionist movement his technique of light in the open air and the luminosity of his colours. Moreover, the painter participated in the last exhibitions of the movement between 1879 and 1886.

While his wife moved to Denmark with their five children, the painter decided to break with the Impressionists and became close to artists with different ideas. 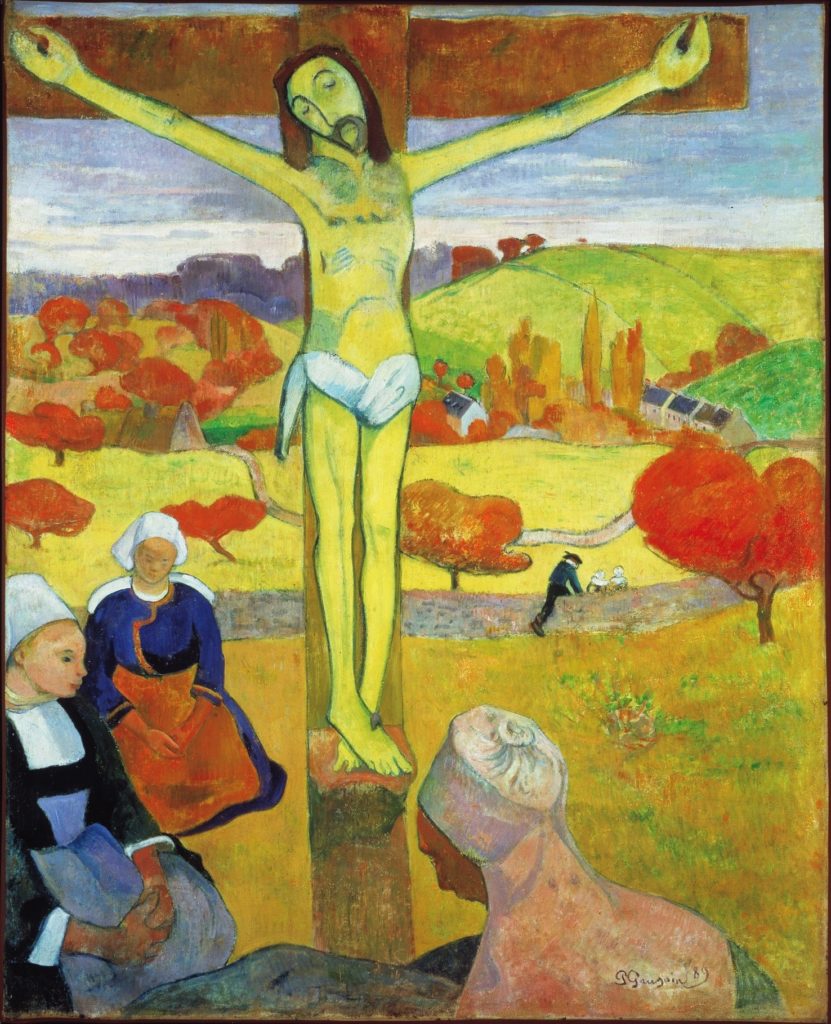 After the stock market crash of 1882, the painter decided to leave his job to devote himself fully to his artistic production. Forced to leave the capital because of his financial situation, the painter went to Rouen. Consequently, a few months later, penniless, Gauguin was forced to join his family in Denmark.

Misunderstood by his in-laws, the painter soon became discouraged and decided to leave the country for Paris with his son Clovis. Living in great poverty, often overwhelmed by illness, the painter and his son are helped by his faithful friend EmileSchuffenecker. Even though the painter hardly earned a living from his works, they were often favourably received by the critics.

In 1886, a new artistic trend was born: symbolism. This new movement opposed Impressionism by praising not the objective painting of reality transcribed by numerous visual details but the painting of the subject’s own character symbolised by its essential features.

During this year, the painter went to Brittany, more precisely to the Gloanec boarding house in Pont-Aven, a village where fishermen and a colony of artists lived. In the summer of 1888, the painter met the young painter Emile Bernard. This meeting was marked by a close collaboration.

Emile Bernard was closely associated with avant-garde artists such as Georges Seurat and Vincent Van Gogh and was attracted to pointillism. But he also had a great influence on Gauguin, particularly on the technique known as cloisonnism. Thus Gauguin adopted an anti-naturalist and symbolist conception of painting, as shown in the work below: The Vision of the Sermon.

The painter returns to Paris and meets the artist Vincent Van Gogh for the first time.

In April 1887, the painter embarked with Charles Laval for Panama where they worked for a month. They then went to Martinique.

The two painters returned to France in November 1887. 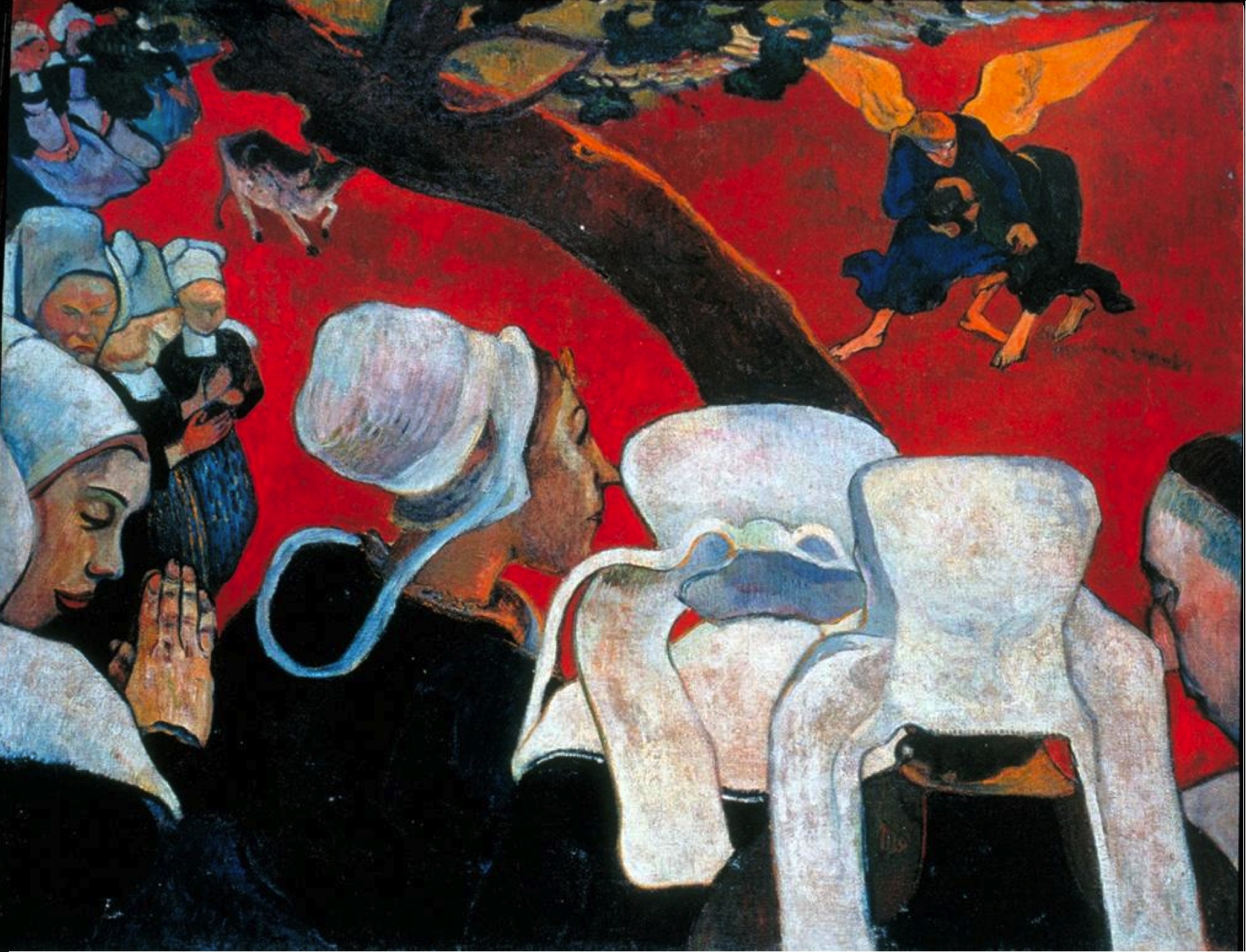 After his return to France, Gauguin went back to Pont-Aven where he developed his “synthesist” theory. This movement was in opposition to the Impressionist and Neo-Impressionist movements. The aim was to simplify forms, eliminating details in order to keep only the significant elements of the observed reality. The use of the outline and the flatness of colour give this simplification.

Arles : his life with Van Gogh 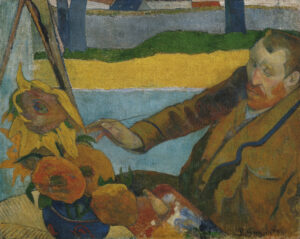 Earlier, before further departures for distant destinations, the painter moved away from the Bretons to join Vincent Van Gogh in Arles. At that time, he painted luminous landscapes with contrasting colours.

At first, the painter’s presence improved Van Gogh’s health. Until the day when the two men no longer agree (on the way they work and on ideas) and leave each other after a violent argument.

The first trip of the painter Gauguin to Polynesia

The World Exhibition of 1889 with its theme of Asian and Pacific cultures prompted the painter to leave again.

In 1890, not yet knowing where he would settle to escape the Western world, the painter mentioned several countries. He considered Java, Tonkin, the island of Bourbon (today’s Reunion Island) or Madagascar. Later, he discovered the horizon of Tahiti and it was finally to this Polynesian island that he decided to go.

“There, in Tahiti, in the silence of the beautiful tropical nights, I will be able to listen to the soft murmuring music of the movements of my heart in loving harmony with the mysterious beings around me. Words addressed to his wife Mette-Sophie.

In 1891, the painter sold his works at Drouot, with the help of the novelist and critic Octave Mirbeau. This sale enabled him to raise the funds necessary for his trip.

Disappointed by his discovery of Papeete and the colonial environment, the painter moved to Mataiea in the south of the island. He married a young vahine, Teha’amana, who would become Tehura in his stories.

During this first stay (June 1891 to June 1893), the painter’s artistic production was closer to the marvellous idea he had of the island than to reality. He painted scenes of daily life, and was also inspired by Polynesian tales as well as the religious and mythical accounts of J.A. Moerenhout, who travelled to the Great Ocean Islands.

In June 1893, the painter left Tahiti to return to France. On his return, he devoted himself to literature and graphic arts. The painter starts writing Noa-Noa in order to make his Tahitian painting understood.

In November 1893, the painter Gauguin obtained an exhibition from the dealer Paul Durand-Ruel where some forty paintings of Tahiti were presented along with three Breton works and wood sculptures. However, the operation was a failure and only about ten paintings were sold, including two by Degas. Strongly criticised by the painters, Gauguin found a better reception from the writers: Mallarmé, Dolent, Leclercq and Morice to whom he entrusted his manuscript of Noa-Noa.

The last journey of the painter Gauguin

Not having found the reception he had expected, the painter decided to return to Polynesia. Without money, the painter repeated the experience he had had before his departure in 1891 and organised a sale of his works. This operation was also a failure, with nly nine paintings finding buyers.

The painter Gauguin arrived in Papeete in September 1895.

He settled on the west coast of Tahiti, in the village of Punaauia, where he had a traditional hut built with a workshop. 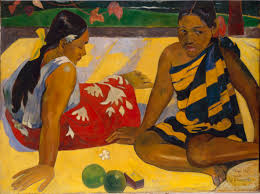 The painter gets married to the young vahine Pahura. He is having a difficult time, and in addition to his financial worries, he has health problems.

At the end of 1895, his partner gave birth to a baby girl named Aline, who lived only a few days. Following this tragic event, the painter considered suicide. Nevertheless, he wanted to leave a kind of spiritual testament in which he showed that he had abandoned the ethnographic approach: Where do we come from? What are we? Where are we going?

After concluding a contract with the Parisian art dealer Ambroise Vollard, the painter Gauguin was freed from his financial worries. He settled on the Marquesas island of Hiva-Oa.

He carved three wooden panels for the façade of his hut, called “Maison du Jouir”. It was in this house that he died on 8 May 1903.